Posted by on February 25, 2013 in Uncategorized 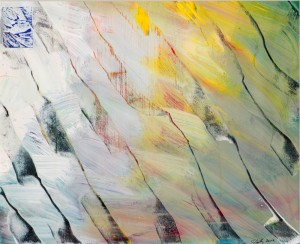 Paintings and Works on Paper

Jeffrey Sully began his artistic work in high school. At first he produced innovative and unusual sculptures from found materials, then moved to focus on his own dream life, in acrylics and collages.

After graduation from UC Berkeley, he enrolled in the San Francisco Art Institute, earning a BFA in painting in 1979. He began to explore different media; for several years Sully produced computer graphics. Then, becoming dissatisfied with the non-tactile nature of the media, he began working with wood. He carved directly into the stumps and trunks of felled Oak, Madrone, Bay and Walnut trees. He gave these pieces flowing, organic shapes.

At the same time, he took advantage of a nearby carpenter shop, to glue and assemble its discarded wood scraps, and form pieces which reflected their edgy and angular origins. Sully began painting these sculptures to reveal surprising shapes and sizes. Sully began to pay more attention to those painted surfaces as much as their sculpted forms: burning, scraping, washing, and layering them. The result was an “aged” surface which looked as if it were rediscovered after years of natural stresses. With these surfaces in mind, Sully moved once again to painted flat surfaces, and another major change.

Using skills developed through sculpting wood, Sully began to alter the exterior form of his paintings. He now reshapes his rectangular canvas into unusual, evocative forms. These pieces carry the deeply expressive spirit which has evolved over the years in Sully’s work. Sully’s paintings have grown to embody a contemporary presence uniquely his own.

View all posts by →

Mouthwash FAQs
Alcohol and Your Teeth